Thinking Rainwater Storage? Bladders are a viable solution to your water storage needs.

The recent increased demand for alternative sources of water in many countries did not surprise many environmentalists. Given the irregularity in world -wide climatic patterns and a consequential decline in annual rainfall, the problem has become increasingly serious. Population growth and demographic changes within populations, such as an expanding middle class desiring a higher standard of living which puts pressure on all resources, including water, have exacerbated the decline in supplies of fresh water. There is an urgent need to conserve, recycle and capture as much water as possible.

While some countries still have adequate rainfall to fulfil their water needs, dry countries such as Australia are now increasing efforts to convince their residents of the need to reduce water usage and to increase the supply of fresh water. Smart solutions have included recycling water (grey water to water gardens and parks) and reclaiming water that would otherwise be lost as stormwater, by capturing rainwater.

Rainwater harvesting is one of the alternative methods of increasing the supply of fresh water which is being encouraged in most countries. It is a system whereby rainwater is collected in a tank before being released via pipes for domestic or other use. 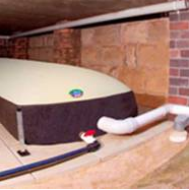 There are several types of rainwater tanks available for this purpose, including slimline tanks, underdeck tank, underground tanks and bladder tanks, which can be made from different materials such as food grade, low density polyethylene (LDPE), fibreglass reinforced PVC, PVC, Aquaplate, steel, stainless steel and concrete.

The Bladder tanks sold by Rainwater Tanks Direct, as illustrated above in an under-floor location, are manufactured from material which conforms to Australian Standards AS/NZS 4020 for drinking water. They have a low profile which makes them especially suited to under-floor or basement settings where the available area may be large, but height restrictions make it impossible to install a relatively tall circular, square or slimline tank..

These tanks are relatively light to transport and can be assembled in a sub-floor space, only requiring an access point 1 metre by 1 metre. The bladder is laid out within a galvanised steel frame. Each bladder can be up to 2.1 metres wide by 8 metres long with a maximum height of 600mm and a maximum capacity of about 10,000 litres for each bladder when filled.

One of the biggest benefits of bladder storage tanks is that they make valuable use of unusable space, but do not affect the living or working space of the home or business, creating important water storage opportunities.

Other benefits include reduced water bills, low maintenance, as they are relatively resistant to algae growth and are certified not to leak under normal conditions when properly installed.

There are several suppliers of bladder water tanks so choosing a supplier can be a complex decision. Look for those suppliers who offer a comprehensive extensive warranty.