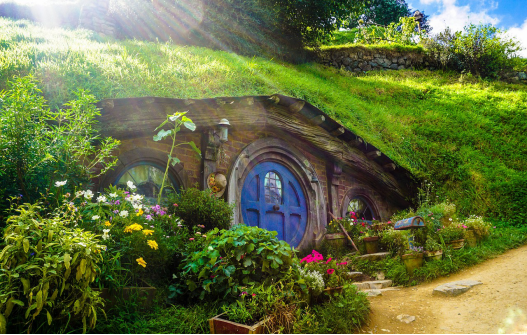 If you’re a huge fan of the magical adventures of Frodo Baggins, Gandalf & friends, in the most successful movie adaptation based on a great novel by J. R. R. Tolkien—The Lord Of The Rings—then you are very familiar with Bag End or shall we say the hobbit-burrow, the place where it all began. The Hobbit house is a house that is built for the film itself and since then, it became a very well known architectural aesthetic and a tourist spot in New Zealand, and it is usually built on a hill but is covered with vegetation making it look like it was built with the hill itself with its iconic round door with its door knob in the middle of it.

With the success of the film directed by Peter Jackson, another trilogy was made prior to the original trilogy—The Hobbit—and because of this, the popular structure became even more popular to the world, and eventually became a tourist destination with a lots of activities that you would enjoy and it’ll make you feel like you’re a hobbit yourself.

With all these, can we have our own Hobbit house too? It may seem like it’s an impossible feat with all it’s success throughout the year but lucky for those LOTR fans, it is achievable. You can now build your own hobbit house and experience the magical life of a hobbit.

Hobbit-architecture—as locals may call it—has been considered to be a great design in according with having a green home. Not only because of the green vegetation covering the whole structure but also with how nature does it part well in this structure, from giving natural lights, to a natural source of energy powered by the sun, to the natural ventilation, and all the way through having natural source of pure and fresh source of water—courtesy of rainwater harvesting system.

Let’s run by it one by one and cite all the benefits of having a home powered and maintained by none other than mother nature itself.

It is quite odd that this kind of infrastructure that is built underneath a hill, covered with vegetation could possibly acquire natural lights—well, yes, it is quite odd, and also possible. You just need to orient your glass windows to where the sun’s path will move. It also depends on which part of the globe you’re in, like if you’re country is located in the northern hemisphere then the sun’s path will move from east to west in the south side of your house, and as for those countries who lives in the southern hemisphere then it will rise and set on the north side of your house.

A brilliant orientation is the key here. Same goes with the next one on this list.

With this kind of power source, you won’t be worried about any monthly electrical bills because you can now harvest the power of the most energy-rich source in the universe—the Sun. Solar panels aren’t new to everybody’s community anymore, it’s in everything, even gadgets have solar powered batteries. It’s not really a surprise, much more to this kind of house, you can just set your solar panels right above your hobbit house and enjoy free energy right within your reach. This is also advisable on tropical countries, or countries that experiences warm and hot weather.

You also need to put into consideration the ventilation of your house when you need to orient your windows. Cross ventilation is a common thing to do in architecture, because this is the part where you place your window openings in a smart way to have natural ventilation inside the structure, it means that you need to put windows on opposite walls of each other so that once the air comes in from the one side it will go inside the area and then goes out on the other end.

Sizes of each window openings should also be considered depending on how constant the air flows in that area, large openings are only desirable when the wind is constant on its direction, or if the airflow of the space is required, a smaller opening forces air to flow at a high pressure.

Having rainwater as your source of water is an efficient way to cut your monthly water bills in half. Not only it is used for cleaning or bathing, it is also consumable if well filtered. You can store water in your rainwater tanks, whether be it small tanks or large ones, and you can install them beside your hobbit house or even cover it vegetation just like your house.

There are different ways on installing your rainwater harvesting system, and it seems to be perfect on your hobbit house, with a great dome shaped house like that, you can even surround your house with a catchment so that it would help on storing rainwater for you.

There are many ways on how to have a green eco-friendly house, and a house re-imagined by great visionaries, that even houses that are from your favorite fantasy novels and movies can now be yours in real life—not to mention that it’s very efficient and a friend to mother nature herself. It just shows that even your wildest imaginations can come true if you really put your backs into it. You control how to live your life, may it be classy or magical, either way you’d have the experience of a lifetime.